Empire of the Sun

What else do you do when you can't sleep? Finish a book, of course. But also, watch the movie adaptation!

Empire of the Sun, by JG Ballard, has been on my TBR shelf for a long time. I first discovered him by paying attention to the credits from Waterworld. Yes, that movie. Supposedly based on Ballard's The Drowned World, so of course I had to read it.

Wow, so different. And better.

So next I got his short stories, volume 1. Great stuff in there. Read that 10+ years ago, so don't remember much, except the two or three I skipped as they were way too psychological, a la weirdo stuff from the early 1970s.

A few years back I tried his Kingdom Come. Didn't like it much. Can't remember how much of it I read, but not much. Maybe I'll attempt it again someday.

Recently, when I found the Classics Club and had to come up with my 50 classics, I sought out lists. There I found Empire of the Sun. I'd already had it on my shelf, as I said, but I thought here's an excuse to read it. I went to the library last Saturday with my list of 50 on my phone and started at the card catalog. Empire was one of the few the library actually had on its shelves.

So glad I did. What a great book. I also found the audiobook on Hoopla, so I managed several chapters each day driving to/from work and walking the dog. A chapter or two at night before bed.

Great book. Great war book. Again, one of my preferred genres. Not quite sure how much of the book was Ballard's own experiences and how much fiction, but I don't care. Not even going to look it up.

And the film. I'd never seen it, only known that Christian Bale was in it. A very young Bale. And it was incredible. Everyone in the film was great. A bit long, and of course changes and reductions from the book, but altogether a great watch. 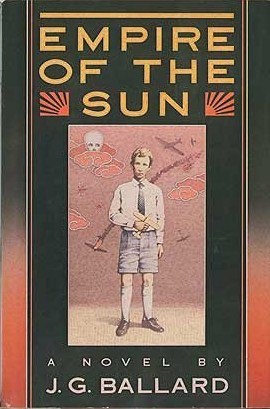