The Caves of Steel by Asimov. This was chosen in our family book club. I'd read it back in 1989 or so. Aged. A bit simple. Not as bad as Ringworld (oy) or Stranger in a Strange Land (oh God). But good parts to it, especially setting the stage for rules of robotics. And the wonderful pair of a robot and human. Oh where did you go Almost Human, how I miss you.

The Stone Face by William Gardner Smith. Interesting. This was the NYRB Book Club pick for July I believe, maybe June. Experience of an African-American in Paris in the 1950's. Interesting. 3 stars. A bit preachy. Not sure how much of this is autobiographical. I've read less obvious books about the black American experience.

An Ice-Cream War by William Boyd. I read Boyd's A Good Man in Africa last year and loved it, and same here. Still don't know why the title. Where's the ice cream?

King Leopold's Ghost by Adam Hochschild. What a horrible human being. Raped and destroyed the Congo. Burn in Hell.

The Glass Bees by Ernst Jünger. A year or so ago I read his A German Officer in Occupied Paris. Incredible writer, this one had an intro by Bruce Sterling, so I knew I had a good book coming. This could fall under Dystopia. Strange dystopian story, unlike any of the others I've read during my year (2019?) of dystopias. Zapparoni = Bezos or Musk?

The Boy Who Harnessed the Wind, by William Kamkwamba. Great book. If we were still homeschooling this would be required reading. This kid didn't let anything stop him. And I'm not talking pathetic first-world "anythings," I'm talking about famine FFS. And talk about recycling, this kid did it. Turned out great for him too. Spoiler alert: in 2014 he graduated Dartmouth.

In the House of the Interpreter by Ngũgĩ wa Thiong'o. This memoir was great to read, not just for the history of Kenya in the late 1950's during the (British) state of emergency. But especially fun was seeing mention of the father of one of my dear friends, with whom I served in Berlin. This guy took advantage of the opportunities he was given, and went through some hell. Will read more from him.

In the language game, I've begun studying Swahili. I might get opportunities to visit East Africa in my job, so wanted to have some language that I could use there. Interesting and fun language, especially with the noun classes. Using Pimsleur along with Colloquial and Teach Yourself.

For Esperanto still reading the book I started during the July Sumoo: Kiel Akvo de l'Rivero by Schwartz. Set in the early days of WWI. In fact, our main character, a Frenchman, just moved to Berlin to tutor "cretins" in French. It is early 1914. Uh-oh!

There are biographies that I will never forget, written by incredible authors who bring their subject to life. I can think of two in particular: Benjamin Franklin by Carl van Dorn and The Rise of Theodore Roosevelt by Edmund Morris. Two great books.

I can now add to this duo Orde Wingate, by Christoper Sykes. Wingate is probably best known as the originator of long range penetration groups and The Chindits, a caconym for chinthe, a spiritual lion in Burmese culture. The Chindits arguably aided in the destruction of the Japanese Army in Burma, which led to their defeat in WWII. A unit I used to fly with is the successor of the American contingent of The Chindits, the 1st Air Commando, and the famous (to USAF Airmen) Colonels Cochran and Alison.

But he did so much more. He personally led the Army in Ethiopia, running out the Italians and escorting Haile Selassie into his empire. He also was a Zionist of some repute. His death was premature; he was memorialized by Winston Churchill: "[Wingate] was a man of genius who might well have become also a man of destiny. He has gone, but his spirit lives on in the long range penetration groups, and has underlain all these intricate and daring air operations and military operations based on air transport and on air supply."

Sykes does a masterful job of engaging the reader, keeping his interest. I have the first edition and it is good, but lacking in end notes or a bibliography. Its copyright is 1959 and footnotes are at the bottom of the page. Unfortunately, once a book is mentioned, it is short-titled under the author's name for the rest of the book. If one wants to find the book, one has to find the first footnote, instead of simply look in the back for the biblio. So many good book recommendations! 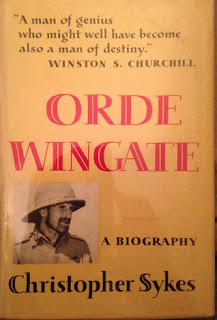